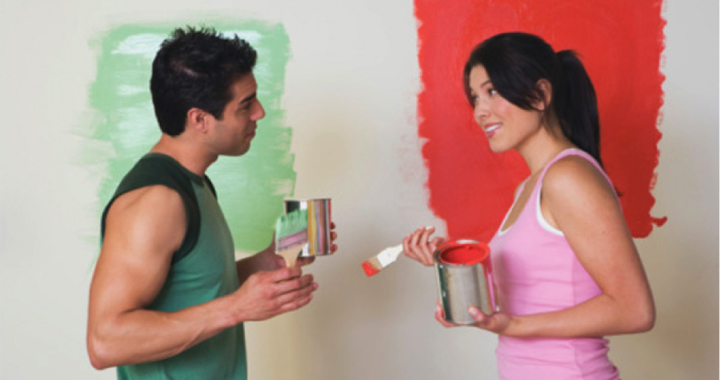 He Says Green, She Says Chartreuse

“Men’s attachment to wood is like women’s attachment to shoes,” says the Toronto-based Seldon, who has helped people make decorating decisions on CityLine and three HGTV shows. In other words, it just is — no other explanation necessary.

These differences can be challenging for couples designing their home and to any professionals helping them along the road of renovation.

“If a couple buys an older home, it’s usually done in wood and is too dark,” says Seldon, of kimberleyseldon.com.”The wife will say, ‘Paint it,’ but the man panics. It’s a sacred cow to him.”

Though there is plenty of room for disagreement, there are also some areas where the genders have discovered common ground. “Many times, women can be comfortable in a more masculine setting than men can be in one that’s feminine. For instance, the wife may appreciate houndstooth and chevron pattern, but men can’t go there with ruffles or bows,” says Seldon.

That’s why today’s neutral colour palettes, linear furniture and minimalistic decorating style are so popular, she feels, because it works for both genders.

Guy Grenier, a clinical psychologist in private practice and an adjunct professor at Western University in Ontario, doesn’t buy the whole “men are from Mars, women are from Venus” argument.

“Differences (of opinion) exist between the genders, but they aren’t correct,” he says. “The genders are more similar than they are different.”

He goes on to say that any differences of opinion — decorating included — are learned behaviour and not innate to one’s sex. “Conditioning starts the minute we are born,” adds Grenier.

He thinks that while compromise is important to the negotiation process, couples could end up with a mishmash without either liking the outcome. “Instead of compromising, taking turns would be a better modality in this case because of differences in style.”

He suggests one person can decide what the kitchen will look like, for example, and the other gets to design the living room.

Seldon has clients choose who will be the point person and the ultimate decision maker for the couple. “You’ll be stuck forever without that,” she says, causing the renovation or decorating process to exceed time and budget.

Domestic bliss is guaranteed when you speak a common language — love for your home.